Visit the old capital of Georgia – Mtskheta and explore the heart province of Georgia – Kartli. Visit the ancient Uplistsikhe cave town and the Soviet dictator Stalin’s hometown where you can explore Stalin’s life and the house where he lived. If you choose Georgia travel as your holiday’s destination, then you should choose Mtskheta, Gori and & Uplistsikhe cultural tour among Georgia sightseeing tours.

Jvari Monastery – the early medieval age church (VI-VII centuries) was built on the top of the hill where St. Nino erected a wooden cross in the 4th century. The church overlooks the confluence of two rivers and amazes its visitors with its beautiful facades and geographical locations.

Mtskheta – The ancient capital of the early Georgian kingdom is located 20 km away from Tbilisi and offers visitors lovely streets, shops, and houses with balconies for exploring and enjoying. The city’s history dates to the 4th century BC and includes various historical monuments. You can explore an archeological site where excavations found the ruins of old baths, king’s palaces; a medieval fortress designed to protect Mtskheta from invasions, and medieval churches.

Svetitskhoveli cathedral – literally the “Life’s giving pillar- 11th century build church is one of the most important churches and architectural monuments in Georgia. The burial place for Jesus’ mantle, the birthplace of Christianity in Georgia, and various legends links to the cathedral. Beautiful architecture, facades, and frescoes leave an astonishing impression.

Stalin’s Museum – the birthplace of Soviet dictator and leader – Joseph Stalin. Explore his family house where he lived as a child and teenager and visit a museum dedicated to Stalin’s life. The museum included different photos, gifts, and documents linked to Stalin’s life. Walk into the railway coach which was used for Stalin’s private coach since World War II.

Uplistsikhe – literally “the lord’s fortress” is an ancient rock-hewn town that was carved in the 1st millennium BC. It was a main religious site for paganism and later became an important Christianity site. A mixture of different cultures, civilizations, and religions give a visitor chance to travel across centuries. A visitor can walk and explore ancient theater, wine cellar, altars, pharmacy, prisons, pagan temples and ritual pits, and secret tunnels.

Price Does Not Include : 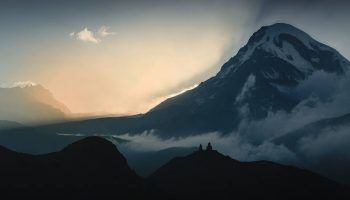 Here’s a map of your travel route, to help put things in perspective

Book Your Adventures with TrekGeorgia